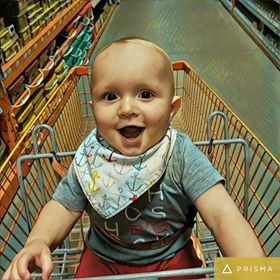 I cannot tell you what a trip this last month has been for me as a mom. My tiny human transformed, rather quickly, from a tiny baby into something resembling a tiny toddler! And it’s amazing! Month 8, or more specifically the transformation toward month 9 was awe inspiring. Bean Sprout went from basically being stuck where he was placed, to being able to crawl, pull up, cruise along and between furniture, climb the stairs and get himself into sitting. He went from basic babble to being able to say: mama, boos(book), a theese (what’s this), and up. He also has pointing down and the gestures for I want and all done. He went from eating only breast milk and purees to eating only real people food and recently dropped feeding overnight. Hallelujah.

I mean, honestly, time slow down!

Or don’t, because I kinda dig where this is headed. I LOOOOOVE toddlerhood. It’s my fave. Everything from 9 months to 3 years I adore. I am so excited about Bean Sprout becoming such a little person. It happened with shocking speed but it’s great! I feel like every day he is a little more of a big boy and a little less of a baby. And a super adorable happy one at that! See that picture? That’s him in Home Depot. You see that face?! I don’t know if I find anything as thrilling as he found Home Depot. LOL. It has taken patience and love and a LOT of food to get him here. But this is what we’ve been up to:

Care: The entertaining of a baby is an ever evolving monster. I’ve talked about this before, but it’s still super true, it can be boring as fuck raising young ones and you NEED something to do! Thank god he is mobile now. I know… not what most parents say. You see, there is just so much more that I can do with him now that he can sit, crawl, stand, cruise and play on his knees. I can take him to indoor play areas and turn him loose. I can set up fun things for him to get into on different levels around my house. I can chase him down the hall. So. Much. Better. Also, he is really trying to figure out speech and categorize his world so house tours are fun again. “A Theese!!”(What’s this) “That’s a picture.” *Gasp* *Spins in my arms* “A Theese!!!” “That’s the dog’s bed”… on and on ad nauseum.  Similarly he is super interested in the outside word and so does great on our morning jogs, which is good for mommy’s sanity. I bet he can do some finger painting now too, but I haven’t tried it yet.

Feeding: Holy god, can my child eat. We started giving him solids at 5 months and he took to purees pretty quickly. By the time he was 8 months he was routinely eating 5-6 tbs 3x a day. Then he got sick, had a horrible fever that ran north of 103 for three days, he understandably felt awful and didnt eat much. Once he was better the weirdest thing happened, he started refusing the spoon entirely and any puree that wasn’t hidden in a squeezer pouch. He wanted only real food. And lots of it like 5-6 tbs at LEAST. I had to get really creative to feed him. I started freezing thick oatmeal into cubes that I could warm slightly and he could eat by hand. I baked all the left over purees I had into muffins that he could self feed. I have now started a board on Pinterest, because duh, of young guy friendly finger foods. Any comments on what you’ve seen work are totally welcome.

Watering: Well, in truth, he gets only a little water daily. He did finally figure out the sippy cup though… so that was awesome. This should really be called milking. But thats weird. Eitherwho, you’d be amazed how much milk a baby can take down while still putting away mounds of real food. We are still breastfeeding 6x a day. Usually, he eats solids an hour after breastfeeding… and since he is only awake for 3 hours at a time it really is like all I do is feed him lol. Wake up, feed, play a bit, feed, play a bit, sleep- repeat 3x and that’s our day! Thank god he finally stopped waking overnight to feed. I might actually be able to feel my head clearing and my zest for life returning… slowly… very slowly. The sleep debt will take a while to go away but it’s glorious that it’s starting. This is one of those reasons I feel grateful that I am not having to hurry back to work, I am able to stay home with him a bit longer, I don’t have to worry about a weaning timeline or pumping schedule. Thanks hubby. I know Bean Sprout isn’t ready to breastfeed any less yet and I’m not ready to push the envelope.

And, of course, all this is mixed with a generous dollop of love! It’s working too, hes growing- 19.5 lbs and 29 inches, and is such a joyful little human right now. Which is amazing, I look at it as pay back for the first 5 months where all he did was scream and puke. My heart is so full of love for him that it’s almost stupid. Thank god for science. Thank god for this little boy!

2 thoughts on “The Care, Feeding And Watering Of A Bean Sprout”