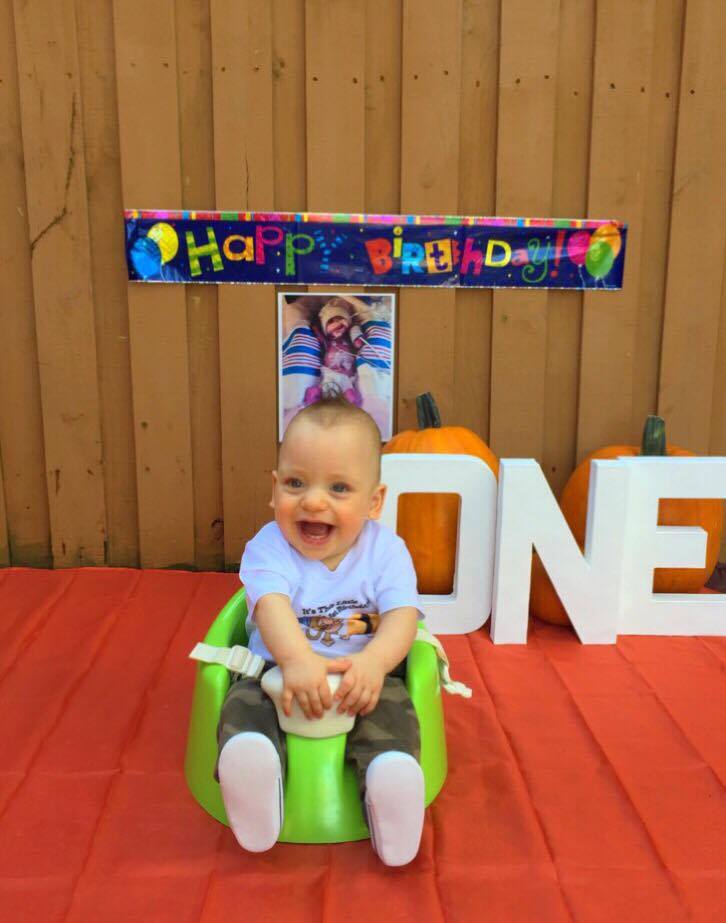 Today’s Squawk Box comes from fellow blogger Chelsey Voogt AKA: “Baby Dust Friend”. We met through Twitter and grew close when we both became pregnant around the same time. Her pregnancy was anything but routine, as you will soon read, and we found ourselves talking daily as a way to support each other. I have never become as engrossed in another woman’s journey as I did with hers. Especially, someone I don’t know IRL! But we talked nearly ever day of her pregnancy and the months afterwards and I feel I have really come to know her deeply. Even a year on we talk at least monthly and I feel like I was so blessed to have been a support for her during the hard times she endured bringing her babies into the world. Because it’s October, Pregnancy and Infant Loss Awareness Month, this shouldn’t be a surprise but I’ll preface her piece with this warning: This piece contains a difficult twin pregnancy and the death of one baby. Please read with that in mind.

There are photos of both babies in the text of this post but I chose to use baby B- Jax’s- First Birthday Photo for the main one. Looking at his healthy, happy, smiling face brings me joy and I know I speak for both myself and Chelsey when I say we are so happy you stayed here with us little man! Here is their story:

An Angel In Heaven/An Angel On Earth

After battling endometriosis since the tender age of 16, and having several surgeries to treat it, I knew getting pregnant would be a challenge but I never knew just how challenging until I actually started to try.

After a little over a year of trying naturally and 2 failed IVF attempts it was brought to my attention, by a reproductive endocrinologist, that it was my Endo that was the cause of my fertility issues. Sadly, it had caused so much damage inside that it blocked both my tubes and left several holes and adhesions. Making it incredibly difficult for conception to happen. Thankfully, with some changes to our IVF protocol, a change in IVF Drs, lots of acupuncture treatments, and a surgery in Jan of 2015 to repair some of the damage and remove one of my tubes, I was finally on the right track towards parenthood.

I needed a few months or rest and recuperation from the surgery to remove my tube but finally in May of 2015 it was officially baby making time!

With the first attempt at IVF we had only gotten 2 eggs resulting in 1 embryo to use. The second attempt 1 egg with 1 embryo to use.
So I wasn’t too optimistic going into this new try. We magically got 7 eggs and 6 embryos to use this time! We felt like we hit the jack pot!
We ended up doing a 5 day transfer with two of the embryos since implanting 1 the first two times didn’t work. We wanted to be extra sure we would get preg this time…

Neither of us thought both would take but, to our surprise, a few weeks later we found out we were pregnant with twins. We were over the moon with joy. Twins! “How could this be” we thought, “how did we get so lucky!?” Before we knew it the feelings of excitement were stripped away when, after several scares & trips to the hospital, I was placed on at home bed rest. I was basically only able to get up to shower, use the restroom or eat really quickly.

The Drs had found that my cervix was shortening too quickly, literally by the day, so doing everything we could to keep the babies in we opted to do a cerclauge procedure. For those of you who don’t know what that is it’s where they sew your cervix shut in hopes it will keep the babies in until they are at a healthy point where they can survive outside of the womb.

My High risk dr wanted to be extra safe so decided to put an extra stitch in.

This procedure happened at 16 weeks of pregnancy. Around this same time we found out (be still our hearts) we were having a baby boy and a baby girl. Baby Jax Jayden & Baby Mila Marie. We had picked those names out at the very beginning of our TTC journey & to us they were the perfect names!

At 21 weeks of pregnancy things quickly went from bad to worse when I woke up to a large amount of bleeding. One of the two cerclage stitches had pulled through from the weight of the babies bearing down on my cervix. Scared to death not knowing what our future held I was placed on hospital bed rest until the babies came. I wasn’t even allowed to leave my bed to use the restroom instead I was told to use a bedpan right in the bed.

On October 4, 2015 at 22 weeks & 6 days pregnant Twin A, Mila, started making her way through the last stitch. With her head already crowing the dr’s gave my husband and I the choice to do a c- section and have both babies born or cut the stitch and let her be born and see if Twin B, Jax, makes his way out as well. After making the decision to cut the stitch at 7:37 am Mila Marie Voogt was born weighing in at 1 lb 1 oz & 10 1/2 inches long. Jax decided to stay on board a little bit longer.

I was ordered to stay on the labor and delivery floor since it was unknown what would happen with me next, whether I would stay in labor or not, and so I was unable to make it to the floor directly above mine to see & spend time with my daughter. Mila was born with a brain bleed but for being such a small small baby and having the issues she did she continued to surprise us on a daily basis with how amazing she was doing.

Sadly, 4 days after being born on October 8,2015 Mila became very weak. The drs, doing everything they could to figure out what was wrong, discovered she had a small hole in her intestines. With daddy right by her side the drs quickly jumped into action and operated on her in hopes they could stop the toxins from pouring out into her tiny, helpless body. Mila’s body & heart became too weak to handle everything that was happening to her & all of her monitored levels began to drop. My nurses on labor and delivery rushed a gurney into my room so they could get me to her bedside as fast as possible. I needed to see my daughter.

I made my way up and for the first time ever I was able to touch my daughter.

Not wanting to leave her side, but knowing it was best for Jax, I was wheeled back down to labor and delivery. They promised me if anything else were to happen they would come back and get me. Not even 20 minutes later my nurses came rushing back in. This time the moment I got there my husband looked up to the monitor and said “She has no heart beat, baby. ” 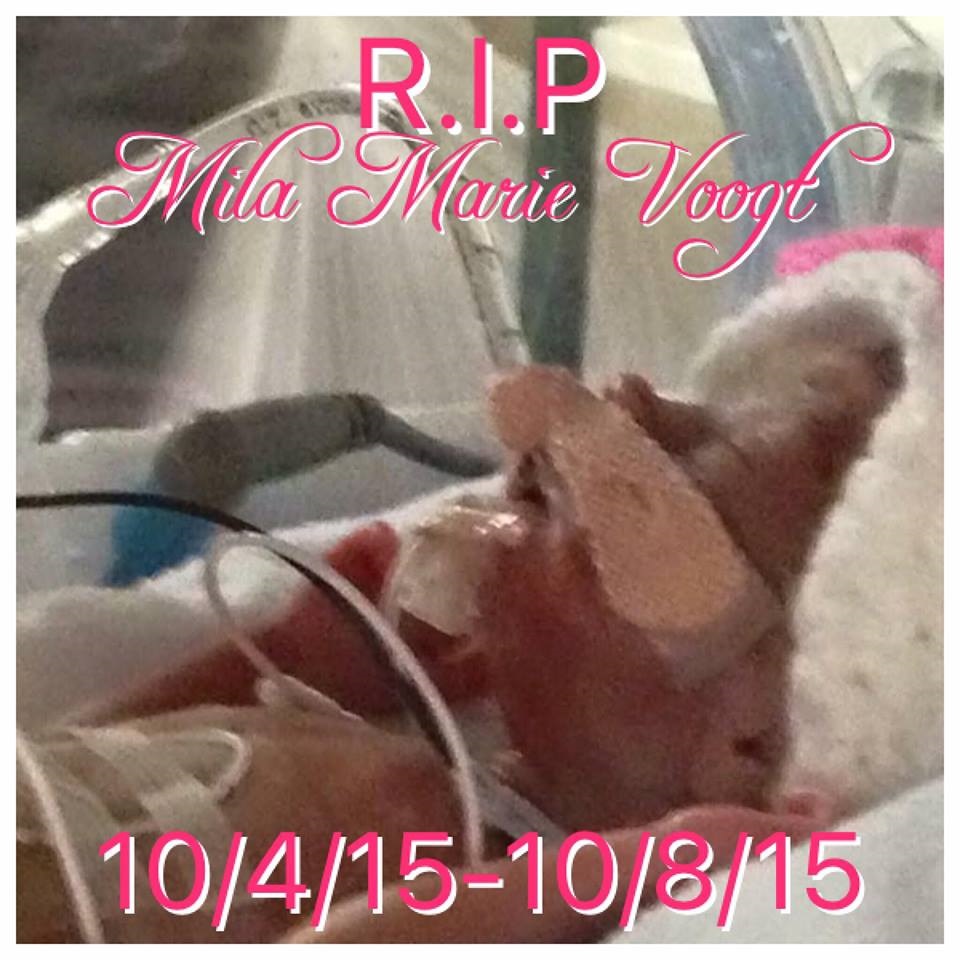 As we prayed and prayed again, begging and pleading for her little body to pull through, they kept bagging her to get her to breathe. I looked up at her dr and asked “She’s gone isn’t she ?” and with tears in his eyes he shook his head yes. I asked them to please give me my daughter. They took all of her leads off and wrapped her in her pink prayer blanket we had placed on her incubator shortly after she was born. We held her in our arms for close to an hour just taking in every single curve & every single feature of her face, her tiny hands , her tiny feet… just everything. We knew the moment we handed her back we would never be able to take those little things in like that ever again.

3 days later, having an extremely hard time coping with the death of our sweet angel Mila, I started having contractions again &  my water for Jax broke. We were trying to keep him in as long as possible, in order to give him the best chances of surviving, so we opted to monitor his condition and try to stop my contractions and let him stay in longer.  I should say that after mila’s delivery we opted to do something called an endo-loop. This is where they leave the placenta in on purpose in hopes of slowing the labour for the second baby. Mila’s placenta was acting like a cushion to keep Jax in. They put me on heavy antibiotics to ward off infection from the placenta and waited. After 3 days of constant contractions my body wasn’t able to handle the endoloop anymore and on October 15, 2015 at 24 weeks 3 days pregnant I woke up with a fever of 104. My high risk Dr, who stuck by our side through all of this, decided for the safety of the baby and now myself it was time to induce.

With Mila in our hearts at 10:19 am that morning our beautiful rainbow baby made his way into this world. Weighing in at 1 Lb 4.8 Oz’s & 12 inches long Jax Jayden Voogt was born. He had officially stayed inside me 11 days longer then his sister. Jax was sadly born with a brain bleed as ,though thankfully not as bad as Mila’s. He was able to recover from his. 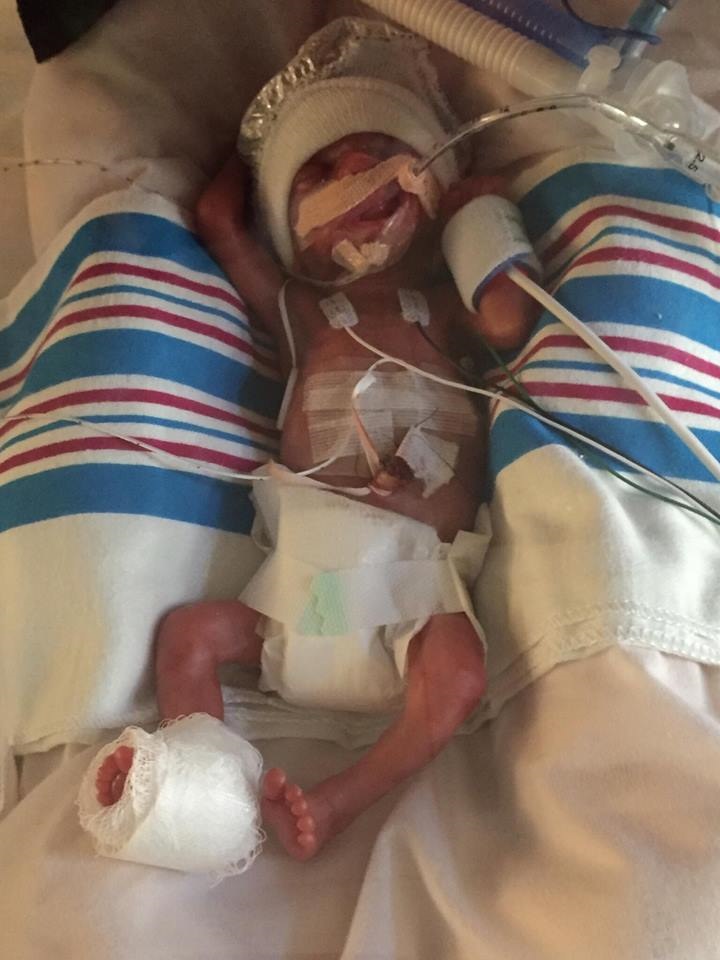 We never gave up hope, we never stopped praying, even when we felt angry and confused, we did everything in our power to keep the faith.
After 104 days of ups and downs in the NICU on January 26,2016 Jax Jayden got to come home with us!

We’ve come so so far & we still have a little ways to go with developmental stuff but Jax is an extremely healthy & happy baby boy who happens to be turning 1 on Saturday!

One thought on “Squawk Box: An Angel In Heaven, An Angel On Earth”