*Disclaimer: This post documents my Big Fat Positive. Please, take care of yourself. If you’re not in a good headspace to read this- stop now. No hard feelings, XOXXO.*

We did our IVF embryo transfer on March 30th and then went home with the knowledge that I was now PUPO. Mind fuck. Then, all there is to do is wait. So I waited. And waited. And waited some more. My clinic doesn’t test for pregnancy until much later than most- they wait to 14 days after transfer, which works out to 18 dpo. Super-duper long time! This two week wait dragged on longer than it ever has before and I really thought I would be able to make it to the beta blood test without peeing on a stick.

I hate peeing on sticks.

I have never ever had a whiff of a positive and it’s gut wrenching- Every. Single. Time.

That’s why after every IUI I waited for the blood test and didn’t even think of home tests.

But, then again, I knew I was PUPO this time. I knew there was a live embryo after transfer INSIDE me, y’all! So naturally this wait was torture! Around 5 days past transfer I started thinking how that really equaled 10dpo… people get positives then, right?! I restrained myself. Every day after that I had to run to the bathroom and piss out all that first morning urine super-fast before I lost all self-control.

I made it all the way through the week leading up to my Sunday blood draw. And then the unthinkable happened. A friend of mine tested and hers was positive.  And that got my head spinning. “If hers is positive… it should show up for me. Right?!” I paced around, having not peed yet, consumed with indecision. I chatted with the hubby and kissed him good bye on his way to work, and never once mentioned that I was thinking of testing. As soon as I heard his car back out of the garage I raced upstairs. I ripped that First Response package out of the drawer and slammed it down on the counter.

Still not convinced, I should test I stared at that unholy pink package a while. I was 11 days past transfer… 16 dpo. I nodded to myself and grabbed a cup.

I dipped one test in, counted to 6, and pulled it out. My hands were shaking so badly that I actually had to try 4 times to replace the cap. Then I panicked… what if I did it wrong?! What if I messed up the results?! I quickly dipped the second stick from the package as well and then fled from the room like I was on fire. I set my timer to 5 minutes.

When the timer went off I walked back to the bathroom and leaned against the wall. I told myself it would all be ok. I told myself that if it was negative we still had 3 great quality embryos frozen and had more chances. I told myself that, no matter what, I would not die. Time to look. Deep breath.

I tried to look with confidence, head held high, and then… there were two dark lines. For a second I was so stunned that I didn’t do anything. I couldn’t believe it at all. Then I lifted it with shaking hands and really SAW it. There was a second line, it was incredibly dark. The test has a picture of two lines on it and it says pregnant next to that picture.

That’s when I lost it.

Like, really fucking lost it. I started hyperventilating and sobbing. Jagged, scary, heaving, screamy sobs bubbled out of my throat. I literally could not breathe. I think I was like this for about 5 minutes. Hard to be sure though as I entered a kind of dissociative state.

We had done it!

After close to 3 years of trying and enduring all kinds of procedures and never once achieving anything close to a pregnancy, here I was, holding a positive test! IVF had been a success for us! Incredible. Unbelievable. But there it was. (For what it’s worth, they were both positive … I figure now that the tests are actually pretty idiot proof, but I didn’t want to risk it).

Then I got to do something I’ve been planning for years. Tell the hubby! I didn’t want to tell him over the phone so I knew I would have all day to pull of the surprise. For as long as I can remember I have wanted to tell him using baby shoes. I am IN LOVE with how tiny they are and think it’s a sweet thing to keep as a memento. So, I went to the store and bought some baby shoes. After looking for months straight for the perfect pair and coming up short, wouldn’t you know it, I found the best ones that day? I also bought cupcakes and pizza for the celebration. When I got home I placed the baby shoes inside the toe of his shoes, I tucked them down really tight so you couldn’t see them at all, and then I called him at work to ask if he would go for a walk with me when he got home.

I said I was just feeling so lonely and sad and worried and would he please come home and walk with me *batting of lashes and everything*. He’s a sweet man and so said yes, of course. I asked if he would come home early.

When he got home I had to make polite small talk for a bit while he changed out of his suit and into walking clothes and the whole time I was just dying inside. I pretended I was having a conversation on my phone with someone so that when it came time for the walk I could tape the reveal without drawing his attention. It worked. He didn’t suspect anything funny with me being on my phone and I caught the whole thing on camera!

And, let me tell ya, it was adorable! He goes to put his foot into the shoe and obviously he can’t. He absentmindedly pulls out whatever is in the way and for a second just stares at it. Turning the shoe over and over in his hands before it hits him. And then, in the most Canadian of fashions, he looks up at me and says “Fuck off!” (Basically Canadian for “as if!”). I tell him that yes, I tested positive that morning and he said “Is this for real?” and then wraps me in the biggest hug. We were both pretty misty… And I got it all on film! I’ve only watched it like 100 times since then, promise.

I am so glad that I got to tell him in a special way. I was determined not to just have him there while I peed on a test. I’m glad it worked out.
I peed on a stick every morning from then until my beta blood test and the line just got darker and darker. The last day before beta I did a digital and even IT said I was pregnant (they have higher threshold for hormone). 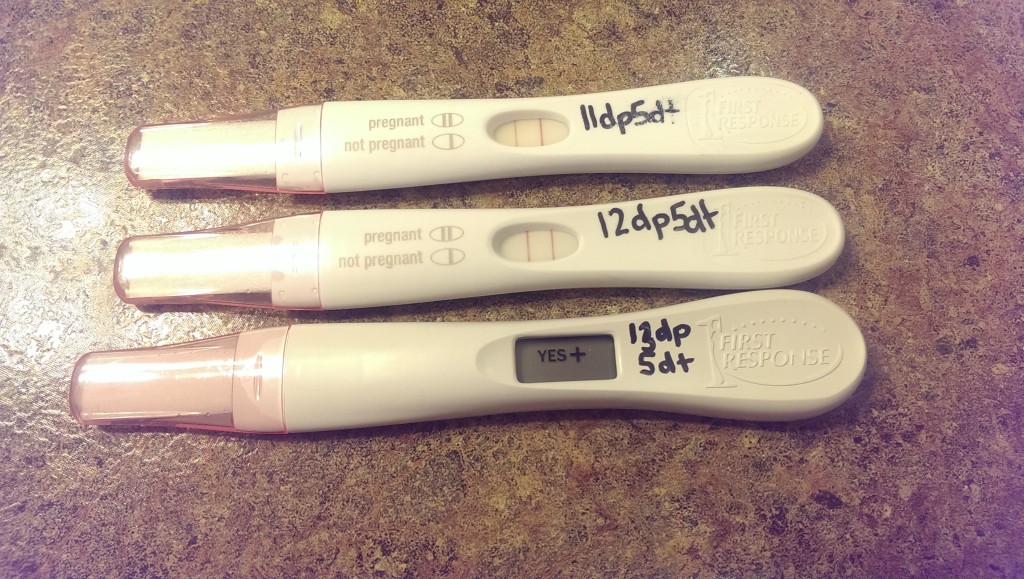 I was feeling pretty good going into blood test results day but you still can never be sure. But the tests weren’t lying. I was pregnant, for real. My beta came back also as positive and a great number: 732! I was 18dpo so that’s at the high end of normal. Which makes me very happy. Because my beta was good and I have no history of loss they did not order a repeat.

So that’s it. I’m knocked up. Fo’ shiz up the spout. Got a bun in the oven. In a family way. And I’m thrilled! Right now I am riding a high. I know it’s very early. I know that nothing is certain. But we’ve never made it this far. I’ve never gotten pregnant before! Not once in three years. As I’m not at increased risk of loss I’m trying to be positive. I’m trying my best to enjoy every single day that I get to be pregnant.

Bring it on! The cankles, the peeing, even puking. I’ve waited a long time. I’m ready.

P.S: This is post one of two today. Make sure to read both- Part two here!