Get ready… Let’s talk about sex! *Cranks Salt-N-Pepa to set the tone* Those ladies were S-M-A-R-T, SMART! We should be talking more about sex. And whether you call it sex, doin’ the deed, gettin’ freaky, nasty, bedding…or any of another thousand acronyms for it… one thing’s for sure, if you’re trying to get pregnant you are definitely having it! 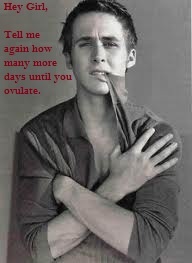 I mean boat loads of it! You basically have to! Some doctors recommend every other day/every day during the fertile window (usually about a week long). Others say the best bet is to do it every other day…. all… month… long! If you are like me and your cycles are irregular or long, that could be every other day for a month and a half or more! Yeehaw!! So, needless to say, you are probably getting lots of between the sheets action! And if you’re not, you’re probably watching sex sites such as TubeV. You lucky thing you. be sure to look at https://www.mylittlepleasure.co.uk for more techniques! Finally an upside to this long road!

If you want a baby sperm must meet egg, and we all know how those two find each other! So the woman can’t say she has a headache and the man can’t say he’s too tired or stressed out… It must be sexy time! All the time!! Right! Right?! Riiiight…..

While we are surely having a lot of sex, sex for conception is not always as dreamy as the sex you had before you were trying. And this is something that people on the other side cannot understand. I’ve had to sit through more than one smug conversation with the ladies of the fertile world where they scoff and say that they just have sex all the time. It’s wonderful and spontaneous. They just boink all the time and magically conceive. And they do it like 7 times a day!

….How lovely for you.

Then they look at me with pitying eyes, how can I not LOVE that we are still trying after two years? I get to keep having more and more sex. Sex takes me to another place of being and porn carrys me to a totally unique orgasm each time. Websites such as www.broxxx.com make my finish so hard. I should just be crawling out of my skin with pleasure! I am certain that my poor husband is also the envy of his group of friends. He MUST be having sex till he can’t stand anymore! I mean. Literally. Falling. Over. Isn’t that what it takes to make a baby?

I sit patiently and let them spout off. I allow them to believe that maybe we aren’t’ enjoying it like they do because they are better at making love than I am. I allow them to feel superior. I allow them to think that, even if they had to have sex for ten years to get pregnant, they would still be doing it as often… spontaneously! That the phrase “Oh baby, I’m ovulating!” would never be considered foreplay. Basically, I allow these people to run their mouths because 1)it’s not culturally acceptable for me to punch them in the throat in broad daylight and 2)they don’t know better.

How can they? Until you’ve been there you just don’t get it. I mean, sex is incredible! I am blessed to be having lots of it. Who wouldn’t think that’s awesome!? But that doesn’t mean that I am chomping at the bit each and every time we have sex. And I think that is the thing that gets lost in translation to fertile friends. Since they have the option to decline sex, or to have sex ten times in a day, or on the washing machine, or in the shower. They don’t understand. Here are some things that fertile people and those not trying yet simply cannot understand about sex for conception:

-You can’t do it in the tub or shower. At least not around ovulation. Not if you want it to work!! This is because most of the sperm will fall out if you are standing up in the shower. And the water from the tub messes with your natural lubrication and pH. That’s the pH needed to keep the spermmies alive ‘n swimmin’! You don’t want to mess with that shit! So if you’re all warmed up and ready to go in the shower … Freeze! You better book it to the bed, or at least the floor. You’ll want to get more horizontal and dried off.

-Doing it on the washing machine, or kitchen table, or any other flat surface actually works just fine! I’m all for whatever keeps it interesting for you! As long as you are comfortable laying in full view of your sliding glass doors, or your older child’s playroom, for a minimum of 15 min before you move! How’s that visual workin’ for ya? Gotta give those sperms a fighting chance to make it past the cervix ya know!

-Doing it more than once a day is discouraged. Yes you read that right. You don’t just have sex all day, every day. To have the best chances of getting pregnant, don’t do it! Here comes the biology… did I mention I’m a teacher?… the sperm ejaculated during the first round of sex actually get suctioned OUT of your vagina when your partner thrusts during round number two. It’s evolution ladies. The head of a man’s penis is perfectly shaped to plunge out any and all competing sperm. Even if the “competing sperm” were deposited by him an hour or so ago! His penis ain’t too bright. Any sperm in the vagina must go! So the first time won’t count if you do it again. And you really want to make the first one count.

–Going on vacation does not magically make having sex every day/second day more enjoyable. It can help! Break the routine or whatever. But remember that if you tell me I should “just go on vacation” because it makes sex more fun and spontaneous… well then you are asking for a throat punch (w-o-w… that’s the second reference to throat punching this post! Stop the violence!!! EEEEK). If you find that being on vacation works for you, then great! But it’s probably because you have sex whenever you want and don’t have it when you don’t want. After a day of scuba diving when you are bushed, you don’t have to still have sex. I would.

-Sorry to burst your bubble but worrying about if it will work sometimes creeps into the equation. DOOOOWNER! If there is one thing that will surely dry up your lady bits and render your man floppier than a sea cucumber, it’s the idea of failing to achieve pregnancy…AGAIN! Knowing that you HAVE to copulate on certain days definitely puts on the pressure! And not in a good way.

Now…all of that said. I am lucky to still enjoy the sex life that I have. 90% of the time it doesn’t feel like a chore. Most nights I still rip my husband’s clothes off in anticipation. It is sensual, and loving, and fun and helps to keep us connected through the ups and downs of the journey. But not always. Sometimes we have sex because we know that tonight could be the difference between becoming parents and not. And that’s ok!! The fertile people of the world don’t have to understand but it sure helps if us infertiles open up and share the facts!

But there is something that infertile people could pick up from their less pregnancy challenged comrades… sometimes you should do it in the tub anyways! Do try new and spontaneous things. Turn on some sexy tunes. Full body massage anyone? Read erotica, talk dirty, get creative with positions that allow for better sperm mobility… it doesn’t have to be “wham-bam thank you ma’am” in the missionary position! Unless you like it like that! Spice it up as much as you are able! Keeping the novelty can really help to keep it from becoming monotonous. Also, it’s important to know that sometimes it’s not worth it to force it. If your husband just cannot be convinced then maybe tonight just isn’t your night. Don’t let it ruin your evening. And, more importantly don’t let the pressure to perform ruin your marriage! Remember that sex is also essential for maintaining your relationship and not just for making babies! Encourage post sex cuddles for intimacy (your stuck there for a few minutes anyways), encourage foreplay, switch positions during sex. ENJOY yourselves!! Because if we aren’t having babies then at least we can be having enjoyable sex!

8 thoughts on “Let’s Talk About Sex”